For three days I’ve had a fever – CV-negative, but likely my highest fever ever! – which provokes me to start this post that I had meant to do someday, listing some projects that I may never finish (or even begin).

Font-fitting. The idea is to design outline fonts to match certain old favorite bitmap fonts, dot for dot, using curves as graceful as possible. Two-thirds of my posts in the curve-fitting category relate to that project; I won’t recap here.

I have thrown up my hands in bafflement because the fittings often fail to converge. It would probably help if I could put progress on the screen, rather than in image files to examine afterward, but tutorials in that direction have bounced off my lazy old brain. I’m willing to try more.

Pseudo-fullerenes. I made some fullerene models using tables of coordinates found on the Web somewhere. (I think that material is gone now.) I found them unattractive, because the polygonal faces are often so far from planar that they’re hard to see as faces. So I’d like to do in software what I used to do with plastic tabbed polygons, back when I was first studying fullerene topologies on my own. (The company that distributed the kit is defunct.) That is, place some rigid polygons in space and have corresponding edges attract – as ideal springs, not as gravity. To get started on this I need to know how to make a rotation matrix, given an axis (as a vector) and an angle, for which I have not found a comprehensible cookbook algo.

Tesseract sponge. Of the 28 convex uniform tilings of Euclidean 3-space, 11 can be generated by reflection in an irregular tetrahedron of mirrors. If you place a plane so that it cuts four of the tetrahedron’s six edges (there are three ways to do that), and apply Surface Evolver, sometimes the surface converges to an edge, but otherwise you get a triply periodic minimal surface.

How about in non-Euclidean space? The uniform 4-polytopes can be thought of as tilings of a hypersphere, and most of them can be generated in the same way. Sadly, in these tetrahedra Surface Evolver converges to an edge in every case. But I should get something pretty if the surface is constrained to cut the tetrahedron’s volume in half. It would help to find someone who has worked with Surface Evolver in curved space with a volume constraint!

I’d start with the symmetry system of the tesseract, which happens to be the only nonprismatic system in S³ with two different kinds of mirrors (four on the coordinate planes and twelve diagonal); in the others, each mirror takes on all four roles in different instances of the fundamental simplex. So my model, in stereographic projection, would look like a lentil, bounded by one mirror of each set.

3-tiling catalog. In 2006 I made pictures of the Euclidean tilings mentioned above, for Wikipedia. I would love to do the same for the other seven Thurston geometries; there are I think 64 (plus two infinite families) in S³, about 230 known in H³, at least 18 (plus two infinite families) in S²×R, and an infinite number in H²×R (I have in mind a selection of 36). I have no idea whether the three more exotic geometries admit any uniform tilings at all. Need a non-Euclidean ray-tracer!

I’ve had a number of mugs printed by Zazzle, and most of them came out gorgeous; but last summer I was peeved enough by a delivery cock-up to want to take my business elsewhere. Recently I got around to doing something about it, with even more disappointing results.

Threadless would not let me sign up. I can’t tell which of my address, handle and password offends it, let alone how.

Cafepress failed to upload my design.

Spreadshirt and CustomInk cannot do a wraparound design on a mug.

Who else is out there? Maybe I have cooled off enough to go back to Zazzle.

You probably haven’t noticed the absence of a link in the upper left, “buy 2D printed objects”, which went to my catalogue on Zazzle: shirts, mugs, posters. END_OF_DOCUMENT_TOKEN_TO_BE_REPLACED

I toy with the thought of converting this here website to MediaWiki (which my host supports), as I am more efficient at editing there than at writing raw HTML in vi.

The wiki’s first articles would be:

I’d continue to report new thoughts here, and then integrate them into appropriate articles. I wonder whether MediaWiki and WordPress play well together. I’m not aware of any personal website that combines blog with wiki, but it seems unlikely that nobody does it.

And now I wonder whether a wiki on my home box would help me keep track of the little files I write as notes on this topic or that, and the PDFs that I download to read someday, and the

I got a notice from Zazzle that if I don’t post at least one new product in every fifteen months they’re going to charge me a Non-Contributing Account Fee. So here’s one. I can spin more variations on this theme until the cows come home.

This morning I saw a series of flashes (both bright and dark) in my left eye, along a peripheral arc. They’ve stopped for now but I also have some new floaters. I have a recurring urge to clean off the spectacles I’m not wearing! 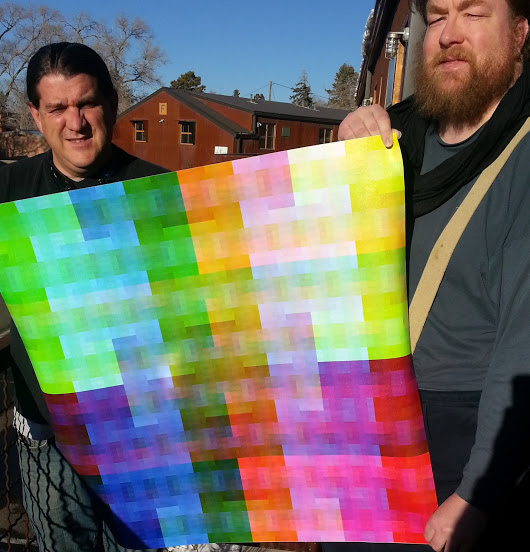 Sometimes I search my blog for this picture and scratch my head in puzzlement that it’s not here, before remembering that I posted it on Google Plus back when I used that.

So here it is. Stephen Guerin (the shaven one) displays his canvas print of one of my designs.

The colors came out better than I hoped, in stark contrast to a couple of mugs with related designs that I got from the same shop.